Years ago, long before my son was born, I had an obsession with sculpting miniature food.  I had always had affection for miniatures as a child.  I used to create little furniture and pretend food out of odds and ends all the time.

Somehow, this dormant affinity for all things little became active again, and I found myself making all sorts of miniature foods out of Sculpey (a brand of polymer clay) in my spare time.  With nowhere to house them, I gave them away to friends.  Some became meals for the Barbies and Kens of their children.

Nowadays, I don’t have the same strange fervor as before, but I occasionally sculpt food for Jamie’s Lego people. 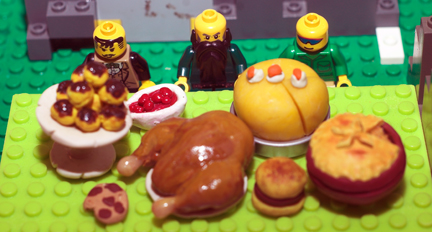 So recently it seemed only natural to delve into the world of fondant.

I used a homemade marshmallow recipe I found on Confections of a Foodie Bride and cut it in half.  There are others that involve gelatin and corn syrup, but I decided to go the easiest route!

Fondant is great fun for kids.  The texture is similar to Play Doh.

Which is Playdoh and which is fondant!?

Unfortunately, this meant it was difficult to get the level of detail I was achieving with Sculpey.  But it was still fun to play with and brought the kid out in me again.

This is what I made:

Thirty-two fireflies for his birthday cupcakes for camp (his group was called the “Fireflies”): 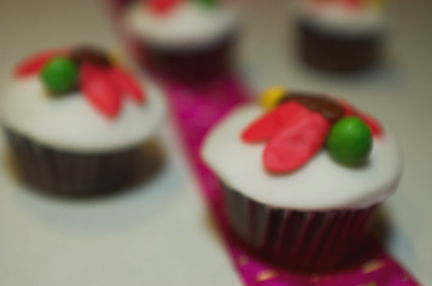 A replica of the cupcake in this mouse painting I did several months ago:

After painting it, I thought:  “I want to eat that cupcake!”

So of course I had to create the real version. 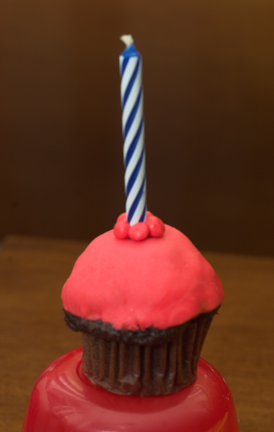 Jamie had more fun drawing on the fondant rather than sculpting it.  Later we did cut outs with the leftover fondant and decorated cupcakes with the shapes.  Of course, we both enjoyed eating the scraps!

For a fun activity with kids, try making this super easy fondant.

Some things to consider:

1.   Color fondant pieces with gel food coloring rather than liquid colors.  Put a few smears of gel coloring on the fondant and knead the fondant with your hands on a board until the color is fully and evenly incorporated.

2.  When rolling and sculpting fondant, grease hands, rolling pin, board, and other utensils with shortening.

3.  Soften fondant by kneading a bit of shortening into it.

4.  There is some debate about whether to store unused fondant in the refrigerator or at room temperature.  I tried storing it, wrapped in saran in an air tight container in the refrigerator, and it seemed to hold up well for a couple of weeks.  But when it is on a baked good, such as a cupcake, I think it is best to not refrigerate, because it seemed to get a bit wet from the condensation.  Other folks say fondant will not go bad (it is made of mostly sugar!) if you always store it at room temperature.

5.  You can use food coloring pens to add more detail.  That is how I drew in the Lego faces.

(Oh, and don’t forget to please vote for my Grilled Portobello Mushroom Eggplant recipe and enter to win in the Cooking Light Recipe Contest Voter Sweepstakes!  Thanks!)

Adapted from Confections of a Foodie Bride

2.  Put marshmallows in a large bowl with water.  Microwave for 1 minute.  Stir marshmallows.  If they are not completely melted, microwave again for 30 seconds.  Stir until all marshmallows are melted.  Add vanilla.

3.  Pour all but 1/2 cup of confectioner’s sugar into the bowl of a stand mixer.  Make a well in the sugar and pour in the melted marshmallow mixture in the center.  Mix on lowest setting.  When the motor of the mixer sounds strained, turn up the speed a bit and mix until all the sugar is combined.  If the fondant is still sticky, add the reserved mixture 2 tablespoons at a time, stopping when the fondant is smooth.  Don’t add too much sugar, or the fondant will get stiff.

If you do not have a stand mixer or dough hook, you can mix the fondant with a spoon and then knead by hand as you would bread on a greased work area.

4.  Knead a couple of times on your work space, shape into a smooth ball, and wrap tightly in saran wrap.  Allow the fondant to rest for a couple of hours and cool down.  Then it’s ready to use.  You may have to knead it a bit to soften it when you use it again.  Keep unused fondant covered.

18 responses to “Fondant: Does Art Imitate Life or Vice Versa?”