As Halloween fast approaches, the thought of doing another haunted gingerbread house crossed my mind.  But a couple of weeks ago Jamie had a play date with his friend, Lucas, and they built an amazing Azkaban Prison (from Harry Potter) out of Magna-Tiles, which inspired me to do something different.

Some basic shapes in a Magna-Tiles set.

Magna-tiles are great building tiles with magnets on their edges making the pieces stick together when placed side by side.  They come in two sizes of squares and several triangular shapes.  I decided to create gingerbread Magna-tiles for them to build their own haunted houses with during a cooking project/play date at our house.  Instead of magnets, of course, Royal Icing dyed grey would be used.  The recipe for the gingerbread is the same one I used last year.  It is so delicious and is perfect for building.

In preparation for the project, I made templates of the Magna-Tiles shapes out of card stock.  Downloadable PDF files of these are here.  Then I cut them out and placed them on top of the gingerbread dough and scored the dough around the shapes with a sharp knife.  I kept the rough edges intact so that the cut edges would stay sharp and crisp.

I baked it for about  10 minutes (the recipe says to do so for 15 minutes, but I found this to be a bit too long).  Then I cut out the shapes while the dough was still soft. After it cools a bit on the baking sheet, you can remove the side pieces and cool cookies on racks.

Since there were three boys involved (Lucas’ brother Caleb also joined in the fun)I made a double batch of dough.  I ended up with three large squares for each boy to be used as a base and twelve squares and a bunch of triangles.  In retrospect, I should have made more squares!

Before they arrived, I made a work station for the builders.  Each had a baking sheet covered in foil to make their house on, a bag of grey cement (icing), a bunch of different goodies to decorate with, some white, black and red fondant for sculpting objects and monsters, and some food coloring pens (love these!) 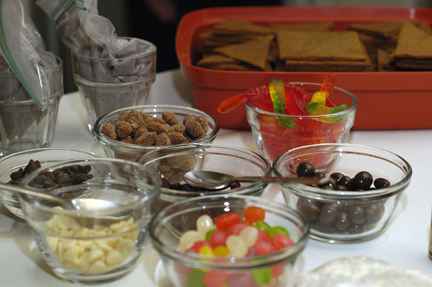 Then they got to building (as will be evident, all three boys are really into Harry Potter right now)… 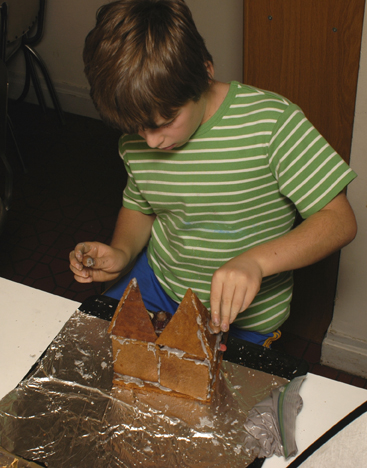 Jamie made the Shrieking Shack: 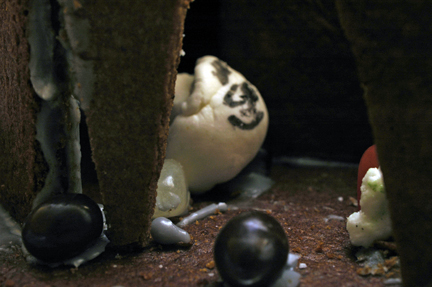 Close up of interior

It was a very creative and sugar filled play date. 🙂

Leave a Reply to The Mom Chef Cancel reply