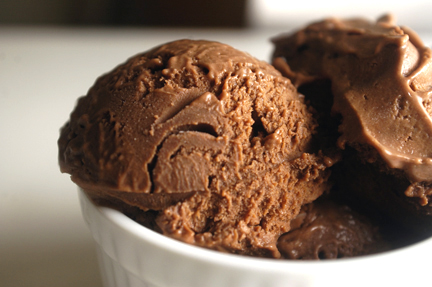 Nowadays, you can find these disks (the other common brand is Ibarra) in the international foods section of large grocery stores.

In fact, my sister-in-law in Gurnee, IL who didn’t know we could get it here sent us about 10 boxes after we commented how much we loved it while visiting during Thanksgiving!

So good on a cold day…

Since it’s been so hot these days, we’ve been enjoying lots of yummy home made cold treats like smoothies, soft serve “ice cream”, and rocket pops.  Hot chocolate hasn’t made the cut!  I decided to make ice cream instead because I had some heavy cream I needed to use up (I mixed it with milk to make half and half).

This recipe is based on one in Gourmet magazine (Feb. 2003).  It’s an egg based ice cream, but since it requires whole eggs, instead of just the yolks,  it’s not as heavy as your usual custard based ice creams.  It’s closer to a gelato.  The flavor is wonderful too.

1.  Heat half and half, chocolate, and cinnamon in a large saucepan over moderate heat.  Whisk until chocolate dissolves.  Bring to a boil; remove from heat.

2.  Whisk eggs with a pinch of salt in a large heat proof bowl.  Add a few cups of  the hot chocolate* slowly* to the egg mixture while whisking.  Add the rest of the chocolate and continue to whisk.  Add vanilla. Stir to incorporate.

3.  Transfer to a clean saucepan and heat over low to moderate heat for about 5 minutes, or until mixture is 175 (F) degrees.  It will thicken and coat the spoon.

4.  Immediately strain into a large bowl set over another larger bowl of ice water.  Don’t skip this step!

5.  Chill mixture until cool and then churn  according to ice cream maker instructions. (The original recipe calls for churning right after, but I find that the heat impedes the ice cream making process which results in “soupy” ice cream.)