It’s getting colder each day here in New York — you know what that means:  Perfect soup weather!  It’s our favorite thing to eat this time of year.

The recipe is at the end of the story.

Other tasty soups to warm you in cold weather: 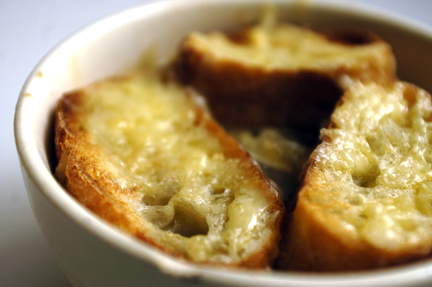 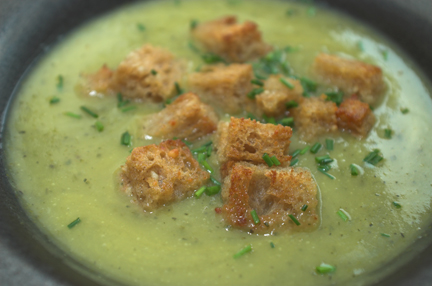 Last week I was going through our pantry to collect food to donate to areas in our neighborhood which had been had been hit hard by the hurricane.  Among the things I came across was a half filled container of dried peas. I had no idea which presidential administration they were from– perhaps the Clinton era?  I decided to risk it and try to make some pea soup in my slow cooker.
A lot of recipes I came across called for a ham hock thrown in, but I was too busy to go on a hunt for one, so I used 1/2 cup chopped apple smoked cured nitrite free bacon from Trader Joe’s.  It was about 4 slices, and I trimmed off the excess fat.

I based my recipe on this one, because it mentioned Pea Soup Andersen’s – a beloved roadside restaurant in the Central Coast of California where I am from.

Jamie and I posing as Happea and Pea-wee in the parking lot.

It didn’t call for ham hock or bacon, but I decided to throw in some bacon just the same.  I also used 4 cups of chicken broth and 2 cups of water instead of all water, and I decided to cook it in my slow cooker instead of on the stove.

The resulting soup was smoky, flavorful, and creamy — just as good as its inspiration!  The amount of dried peas I used cost about $.75, so the whole batch cost about $3.25!  It made about ten generous portions, half of which I have stored in our freezer for future winter days.

If you are ever on the Central Coast, though, tootling along the 101, do stop by and check out Pea Soup Andersen’s.  It’s not just the soup and sharp cheddar sold there that are  great — the whole atmosphere of the restaurant and gift shop is unique.  Just a few miles away is Solvang, a town filled with restaurants, toy stores, bakeries, and gift shops built in the traditional Danish style of architecture.  It is kind of like walking into part of an amusement park–kitschy but cute.  (I think it is the reason why I never had a phobia of dentists — my childhood dentist had a practice there and I loved visiting all the gift stores and eating Ebleskevers afterwards!)  🙂 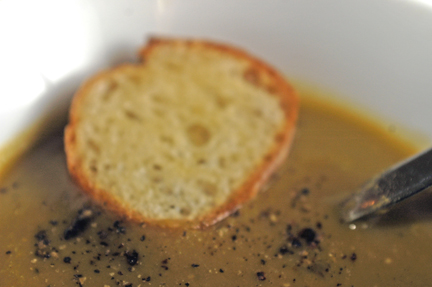 4 slices smoked bacon trimmed of fat and chopped up, about ½ cup