Acorn squash is in season again!  Have you seen them appearing in your markets?  I love roasted acorn squash and did a post last year about how to make it, as well as how to roast the seeds. 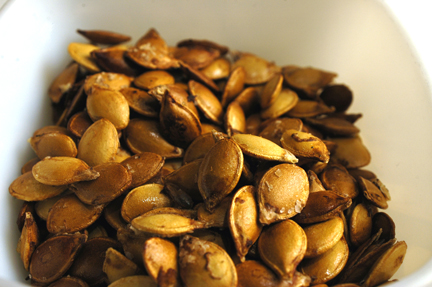 This time, I tossed the seeds in oil and seasoned with cinnamon and sugar and roasted them in our Cuisinart toaster oven before making the stuffed squash.   I served them on our salads with dinner.  So yummy!

As for the stuffed squash, first you have to prep the halves by removing the seeds, then cutting off a little sliver on the bottom so they can sit upright without being a Weeble (70s reference to show my age).

Brush squash halves with oil and sprinkle with cinnamon.  Place face down in a pan, cover with foil and roast in oven.  While they roast, prepare the stuffing.    I wanted something hearty so I used beef and onions.  And thinking of how well acorn squash goes with cinnamon and sweet flavors, I thought it would be great to make a sweet and savory dish.  Moroccan recipes often call for cinnamon, ginger, allspice with meats, so I looked at a bunch of recipes which inspired me to choose spices for this dish.  I also added some cooked brown rice for chewy texture and nuttiness and added golden raisins for another layer of sweetness.

I usually don’t hit it the first time I invent a recipe.  I often go back and tweak it and make it several times.  But this one was great in round one, so I thought I’d share it.  Even Denis loved it, and that is saying a lot!  Jamie doesn’t like acorn squash (I know, he’s crazy).  I used the beef filling wrapped in a flour tortilla and made him a Moroccan Burrito, which he ate with relish.  Crisis averted.

Hope you like this sweet and savory fall dish!

1/2 teaspoon salt and more to taste

1.  Preheat oven to 350 degrees F.   Cut sliver off bottom of both acorn halves so that it doesn’t wobble when resting upright. Brush cut sides of squash with oil, sprinkle with 1 teaspoon cinnamon and place cavity side down on a baking.  Cover with foil and bake for about 45 to 50  minutes, until tender when pierced.

3.  Mix in ground beef, salt, remaining stirring to break up beef. Add rest of cinnamon (1 teaspoon), allspice, and cumin and stir to coat meat.   Cook until beef is browned and cooked through, about 5 minutes.

4.  Stir in cooked rice and raisins and sauté until heated through.